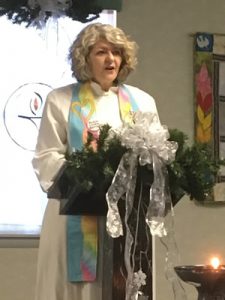 An ordained minister as a title does not give justice to the life experience I have had through the years. Becoming a Unitarian Universalist minister later in life allowed me to utilize those skills I have acquired in 35 years of working and supporting myself in other occupations.

My call to ministry came in 2008, fairly recently after becoming a Unitarian Universalist in 2005. As life events would have it, my path was guided by universal happenings that propelled me along the course of ministry. I graduated from the Starr King School for the Ministry in Berkeley, CA in May of 2014. My ministerial internship led me to the Unitarian Universalist Church in Cherry Hill, NJ where I also completed another year of residency. I then ministered to the Unitarian Universalist Church of the Restoration in Philadelphia, PA. as their Consulting Minister for the 2016-2017 church year.  I worked as a Chaplain and gained vital pastoral skills in Oakland and Berkeley during part of my seminary years and completed a Chaplain Residency Program at Geisinger Medical Center to further my pastoral skills.  I then left to be the Interim Minister at Mission Peak Unitarian Universalist Congregation in Fremont CA.

My early beginnings in the Midwest were experiences of growing up in poverty. Born into Catholicism, I left the church at the age of 18 and for many years was not affiliated with organized religion. I retained my spirituality throughout these years, but was not successful in finding a denomination I could relate to until I discovered Unitarian Universalism. My experiences in spirituality were wide ranging and I fully embrace those who believe in various forms of faith, from Humanist leanings to Christianity to Buddhist Studies. Having experienced these various forms of faith, I can understand why some would believe in Christianity or Judaism or Buddhism or Paganism. In Unitarian Universalism, I discovered the many paths that have led people to this faith and how we all can interact with each other in a faith that benefits humanity and our planet.

I was raised in a small town in the St. Louis Metro Area and received my Bachelor of Arts degree in Art from Southern Illinois University.  I continued my studies years later after becoming an art teacher and received my Masters of Science Degree in Counseling Education from the same university. My varied background and interests have provided me experience that I find invaluable as a minister: Counselor, Teacher, Actor, Singer, Artist, Mediator and Administrative positions. Having lived over half my life in California, I had caught the acting bug while living in Los Angeles and I see this theater experience as valuable in my preaching style and presence. I volunteered as a pro-bono mediator with the Los Angeles County Bar Association Dispute Resolution Service and loved the experience I received in helping to mediate disputes. I have lived in 5 different states in our country, having experienced cultures from the West Coast, Midwest and East Coast. There are not any favorites, as each section of our country provides a deeper look into America in its own way. Although I do admit, I cannot experience any more wonderful weather than California sunshine!